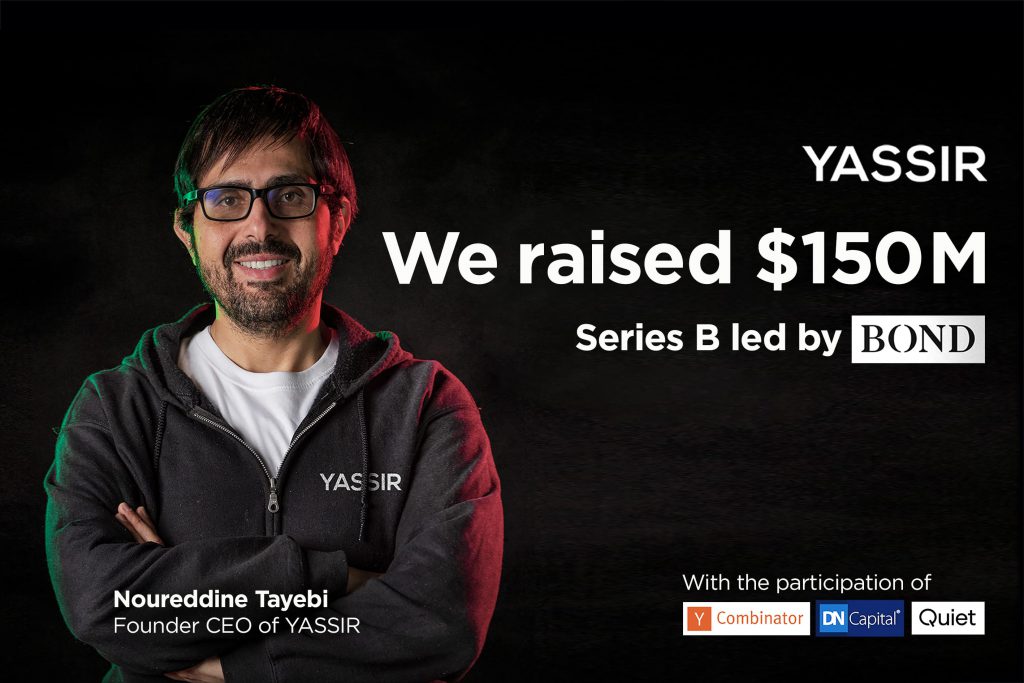 Super app now the most valuable startup in North Africa

SAN FRANCISCO, November 7, 2022 – Yassir, a multi-sided marketplace offering on-demand services such as ride hailing, food and grocery delivery, banking and more, announced today that it has raised $150 million in Series B funding from a series of prominent global investors. The investment was led by BOND, with participation from DN Capital, Dorsal Capital, Quiet Capital, Stanford Alumni Ventures (aka Spike Ventures) and Y Combinator, among other strategic investors.

Having raised $193.25 million in the five years since the company’s launch, it is now the most valuable startup in North Africa, and one of the highest valued companies in Africa and the Middle East. With this latest round of funding, Yassir plans to expand its reach into the region.

“Yassir means ‘easy’ in Arabic, and our mission as a company is to make people’s lives easy,” says Noureddine Tayebi, Founder and CEO of Yassir. “In the markets where we operate, we are already having a considerable impact on how people manage their day-to-day lives. We look forward to expanding our presence into other geographies to become the first super app to achieve mass adoption.”

Founded in 2017, today, the company operates in six countries and 45 cities, where it is used by more than 8 million users. Popular in the Maghreb region (Algeria, Morocco and Tunisia) and parts of French speaking Africa, the super app provides three core services – ride hailing, food and grocery delivery, and financial services. An all-in-one ecosystem, the app provides its customers a single point solution for managing all of their day-to-day activities, from traveling to work to ordering groceries and meals. These services generate revenues for more than 100,000 partners, which include drivers, couriers, merchants, wholesalers, among other gig workers and vendors.

Beyond providing a core suite of services, Yassir offers financial services aimed at serving the full ecosystem, touching every component of the multi-sided marketplace. A 2018 report by McKinsey & Company on growth and innovation in African retail banking, found that more than half (57%) of Africa’s population lack any form of a bank account. Among African banking customers, 40% prefer digital channels for transactions. By providing consumers in Africa with a mobile banking solution, as part of a more comprehensive suite of services, Yassir is meeting an important need in the market, one where 50% of the population already have mobile internet access.

“We believe technology will foundationally rearchitect consumers’ relationship with daily needs – transportation, food, financial services – not just in developed countries, but in every corner of the world,” says Daegwon Chae, general partner at BOND. “This investment is an extension of that belief in an underserved but dynamic, rapidly growing region. Emerging out of North Africa, the app has already become indispensable to users for critical aspects of their lives.”

Noureddine, a Stanford PhD and a native of Algeria, spent more than 15 years in Silicon Valley before returning to his homeland to build Yassir. He adds, “Yassir was founded with a threefold mission. First, we want to create a local tech startup success model which will be emulated by others and more so Yassir team members. Second, we want to empower the local talent and more importantly the technical talent which often leaves the region, mainly to Europe, to pursue further studies or find jobs. We, in fact, hire engineering talent in each country we operate in to expand that mission. And finally, we want to make the lives of our people easy while infusing social values via our products such as trust and mutual help.”

Founded in 2017, Yassir is a super app that provides its users with a suite of services, including rideshare, food and grocery delivery, banking, and more. The company operates in six countries and 45 cities throughout the world, where it serves more than 8 million customers and more than 100,000 partners.